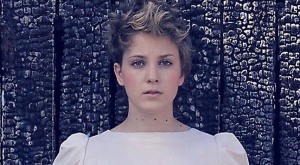 There are a whole lot of soulful, heartfelt, and ernest young ladies reminding us what we are missing from the computer generated and over produced tracks currently on the radio. Perhaps it’s the “Adele” effect, or maybe all these young ladies finally realize it’s ok to be who they are because there is still an audience yearning for original acoustic melodies?

But I digress, this week Los Angeles was invaded by the Aussie’s and Ms. Emma Louise had a headlining gig at The Hotel Café. Quite frankly I was surprised that it was only half full. There has been a lot of buzz generating about this petite Australian lady, so my first thought, “why the empty space?”

As the show began, Emma seemed to be a bit lost, perhaps it had to do with the fact that she had just landed at LAX a few hours prior, which she softly announced on stage. Either way I thought, “Uh oh, here we go…” but after a few songs Ms. Louise came into her own. By the time she reached the end of her set the room was full and she was lost (in a good way) within her music. The closing song was a beautiful track called “1,000 Sundowns,” which she explained was about her Aunt and Uncle who were together for 30+ years until he died of cancer a few years ago. It was gorgeous, heartfelt, and tearful which had the audience locked on her the entire time.

Perhaps Los Angeles is just an intimidating place, or the lack of sleep from a 14 hour flight, but unfortunately the performance on a whole was a little lack luster. That being said, I can see HUGE potential and I think Emma Louise is still someone to keep your eyes and ears peeled to.