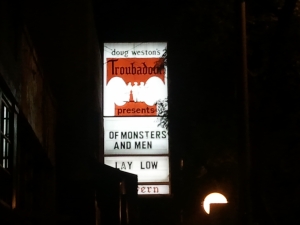 ARTIST: Of Monsters and Men
VENUE:  Troubadour
DATE: Monday, March 21, 2012 at 10pm
COST: $18
DEPARTED THE SHOW FEELING: Not the next Arcade Fire but pretty damn close.

Icelandic band Of Monsters and Men are breaking through to the US market and have been receiving a lot of air play on the major stations. There have been the comparisons to Arcade Fire but OMAM are not trying to be Arcade Fire. Rather, this is one of the first bands of the “Arcade Fire generation.” People tend to forget that it’s the perfect cycle. AF has now been in the national spotlight for over seven years. OMAM represents the next generation taking major cues from the influential act.

That being said, OMAM killed it. They hold their own and bring their sound to a unique level. Whimsical, poignant, and unrelenting, let’s just say this band knows how to work their fans up into a frenzy. I have never heard so many straight (I think), grown men, screaming for more! Their candor on stage is so delightful and refreshing, it reminds me of why I LOVE going to see breaking acts on the scene. There is a lot of potential with this band. I have a feeling OMAM won’t fall victim to the blogosphere and instead continue on to produce some great records.

Side note- Does anyone else hear a little Colin Meloy of the Decemberists from one of the lead singers “Raggi”?