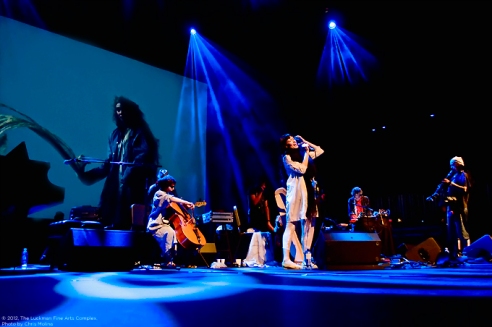 ARTIST: CocoRosie
VENUE: The Luckman
DATE:  Saturday, June 9, 2012 at 7pm
COST: $35
DEPARTED THE SHOW FEELING: like I should join a cult.

Sister duo CocoRosie made their highly anticipated (and very sold-out) performance at the Luckman last night to, shall we say, an exuberant crowd of fans.  These fans are legit. They come face painted, drunk, drugged up, and ready to scream like it’s *NSYNC making their first comeback show.

First up, Long Beach’s Free Moral Agents performed in the outdoor ‘Street of the Arts’ and entranced listeners as they walked into the complex. The blend of their psychedelic moodiness with fierce vocals and complex keys makes this local band something special out in the wilderness of mediocrity.

The ladies took the stage after a rousing performance by New Orleans based rapper (?) Sissy Nobby. Nobby, handpicked by the ladies, had quite the comedic presentation, I guess booty floppin on the stage to a backing track is how they do it up in New Orleans. But I beg the question, was the crowd laughing with Sissy or at Sissy? I’m not sure.

With the curtain slowly revealing the entirty of CocoRosie, the screaming was deafening. The imagery CocoRosie puts forth is quite astonishing. Love them or hate them, they carefully construct what is one of todays most intriquing and thought provoking live elements out there. The big boys such as Animal Collective can put together a projection screen and some live element bullshit and is subsequently admired throughout the blogosphere. This conversational female twosome is giving all those male dominated music/projectionists a run for their money and then some. CocoRosie had a stellar live presentation rolling behind them for more than half of the performance, allowing their followers to sonically, visually, and spiritually melt into their eccentricity.

The personal highlights of the evening was the performance of the new track ‘We Are On Fire’ and their cover Kevin Lyttle’s “Turn Me On.”

One Response to “CocoRosie are crazy ass bitches. Which is why we like them.”