I’m going to make this short and sweet because let’s be honest, you don’t have the time or energy to sit here for 20 minutes while some music nerd rattles off their pompous opinion of SXSW. But you do want to know who’s worth your show dollars? Well luckily I was 99% convinced that sweet live music still exists and it’s coming your way.

The Cori Spelling SXSW highlights include-

Kids These Days: Hailing from Chi-town, these seven insanely talented mode-podge of musicians are bringing the funk. Fusing hip hop, soul, and rock these guys (and gal) are about to break BIG. Possessing an infectious live performance, KTD just dropped their debut last fall and it’s produced by Jeff (fucking) Tweedy of Wilco. I mean, come on??? 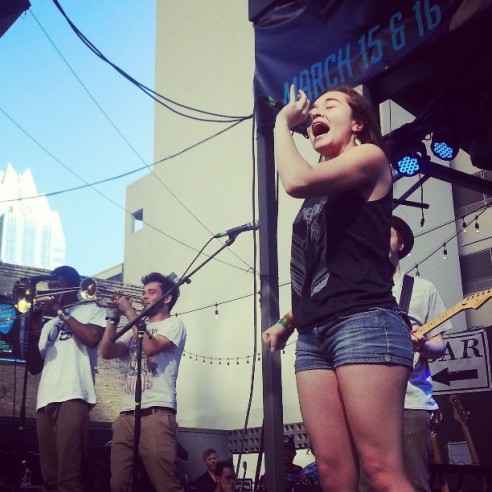 Foxes: This young Londoner is on the rise. Featured on the HUGE single “Clarity” by Zedd, I would argue this song could do for Foxes what “Somebody Used To Know” did for Kimbra. Which on further thought could be a bit scary… poor Kimbra. Foxes vocals and performance dominated the audience and had everyone on their feet dancing to each beat. Keep an eye on this budding young vocalist.

The Last Bison: TLB is the reason you go to SXSW. I had no intention of seeing this band, in fact I didn’t know they existed until I walked into the club where they were performing. A comparison to Fleet Foxes, Mumford and Sons, and The Decemberists is fair. The group looked like they just rolled out of a Laura Ingalls Wilder novel, but nonetheless slayed the modest sized audience that stood before them. Check out their track “Dark Am I”.

BOY: The German-based duo is on the brink of releasing their debut LP stateside, and they generating a nice amount of buzz around it. Comparison? Think about a Leslie Feist sort of vibe. Unfortunately, in good old SX fashion the ladies experienced major technical difficulties. So much so, they couldn’t even begin their set and announced to the audience that they would play acoustically outside of the venue. Of course they were completely enchanting without their microphones plugged in.

The best thing about a festival like SXSW is that you can read 50 different reviews and you’ll be hard pressed to find coverage of the same artists. Bottom line?